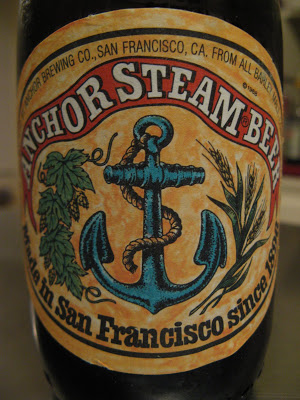 To be honest, I was kind of a long time coming around to Anchor Brewing‘s beers.

I’d drunk Anchor Steam on and off over the years, of course. However, it always seemed a bit expensive for being what amounts to a perfectly fine beer.

I’d always skip over it for beers with stronger character.

However, some friends always mentioned what a good beer they thought it was, and kept it in their fridge, so I continued to try it.

As I learned more about Fritz Maytag’s contributions to craft brewing, (and craft distilling,) in America, I also came to appreciate Anchor Steam’s qualities.

I think, especially, taking the brewery tour one day a few years ago, made me understand how close what is in the bottle is to the process. Just walking around the brewery taking in the smells. Of the hop room and the fermenting tanks. It is all there. It is a very honest beer. They do flash pasteurize and filter before bottling, but what you get is very much a craft beer, albeit on a slightly larger scale.

Another thing I appreciate is that it isn’t an extreme beer. It’s a nice malty California Common. Not so strong that you can’t drink a few, but not so weak as to be, “@#$%ing near water,” as the Australians in the Monty Python skit say of the often valid comparison between many American beers and making love in a canoe.

Anyway, it’s my favorite beer to drink when we’ve got guests coming over, and I need to keep it together enough to play bar tender and cook.

Of course, at the end of the evening, after all the guests have gone home, it’s always nice to reward myself with a tasty Manhattan Cocktail.