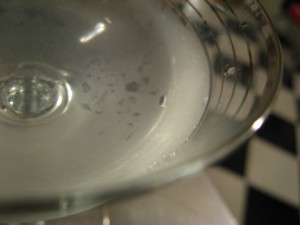 About a million years ago (OK less than a year) we made this very same cocktail as the Claridge Cocktail. At the time, there was some speculation about whether Apricot Liqueur or Apricot Eau-de-Vie was the appropriate “Apricot Brandy”. Knowing the Frankenjack was coming up eventually, I put off giving it a try.

I also asked Matt Rowley what he thought the appropriate substance would be. He thought neither distilled Apricot Eau-de-Vie or imported Apricot Liqueur were particularly likely for a prohibition era cocktail. He felt, more likely, it was a home made concoction made from rehydrated dried apricots macerated in alcohol and sweetened enough to take the edge off.

This time, though, I was going to use the Apricot Eau-de-Vie. I gave the Blume Marillen a smell, and tried to imagine which gin would go best with it. Tanqueray was handy and didn’t seem promising, nor did No. 209. Aviation seemed kind of close. Then I checked the smell of a recently purchased bottle of North Shore Distillery Gin No. 6. “Ding! Ding! Ding!” as Mario Batali would say.

Initially, I didn’t really have a lot of hope that this cocktail would be very good, but the unusual flavors of the No. 6 work really well with the Apricot Eau-de-Vie. The No. 6 is not at all a traditionally flavored gin, but it has some floral-fruit flavors and smells that really complement the Blume Marillen. The flavor of the cocktail brought back real or imagined memories of some half remembered European hard candy from my youth. I was actually kind of chortling as I was tasting it.

I think a dash of orange bitters, a decent cherry garnish, and this would be a real winner of a cocktail.

According to Judge Jr, the Frankenjack was:

Invented by the two proprietors of a very, very well-known speakeasy in New York City.

From “On the Town in New York” by Michael Batterberry:

More typical was Frank and Jack’s, a jolly place where there were generally a hundred people jammed into a tiny kitchen barely large enough to hold three tables. Among those struggling for air and room enough to laugh might be Jimmy Durante, Pat Rooney, or Peggy Hopkins Joyce. It was Frank and Jack who perfected the gambit of getting rid of one drunk by asking him to assist another out the door.

And, uh, oops! I didn’t realize until I wrote up this post, that I had gotten the amounts for the Vermouth and Apricot Brandy flipped. Well, damn it, it looks like I have made a new cocktail. Maybe the FrankErikJack?

This post is one in a series documenting my ongoing effort to make all of the cocktails in the Savoy Cocktail Book, starting at the first, Abbey, and ending at the last, Zed.