Can I just say, I have zero idea what the Raffles, Singapore, or Straits Sling have to do with the earlier beverage of the same name, aka the garnished toddy.

And as far as I can tell, no one else has much idea, either, even when they were popping up, seemingly around the early portion of the 20th Century.

In fact, I’d argue for a separate name for these tall, tropical-ish, pink beverages. How about “Colonial Slings”?

Straits Sling
(for 6)
Place in a shaker 4 glasses of Gin, 1 glass of Benedictine, 1 glass of Cherry Brandy, the Juice of 2 Lemons, a teaspoonful of Angostura Bitters, and one of Orange Bitters.
Shake sufficiently and serve in large glasses, filling up with Soda water.

So, I thought it would be interesting to look at a couple recipes for these “Colonial Slings”.

Trader Vic, in the 1948 edition of his “Bartender’s Guide” includes Slings in a section with Sangarees. About the grouping, he says:

Sangarees are tall drinks, made like Old-Fashioneds but without bitters, and are usually topped with a dash of nutmeg. Slings, on the other hand, in their simpler versions, are pointed up with bitters or a similar type of flavoring and resemble elongated Old-Fashioneds with the addition of a little lemon. With the exception of the Singapore Slings, this entire group of drinks has little merit.

Among these beverages of, “little merit,” he includes several recipes which follow the mold in his description including the Applejack Sling, the Brandy Sling, the Fancy Sling (with Brandy, benedictine, Lemon, Pernod, and Maraschino!) and finally one exotically named the Jungle Fire Sling:

Wow, great name, but If you try that one, you might want to pre-book an appointment with the Dentist.

Of Trader Vic’s Singapore and/or Raffles Slings, there are three.

Another far too sweet one, there!

Well, all I can say is, thank goodness by 1972 Trader Vic only included 1 Sling in his revised edition of the “Bartender’s Guide”. Pretty much the same as the above Singapore Sling–1, with a little tweaking of the amounts of the different ingredients. Apparently the heyday of the Sling had passed.

Down to 6 ingredients and a not too elaborate garnish. Whew, I guess by the 1970s things had calmed down a touch. Though I still question the cluster of cherry-berry flavors. Are Sloe Gin, Cherry Liqueur, Grenadine, and Creme de Cassis all really necessary in the same drink? I also want to note that in 1972 Trader Vic has opted for the less confusing, “Cherry Liqueur,” over the somewhat ambiguous “Cherry Brandy”.

Regarding Slings and Toddies, perpetual crank David A. Embury says the following in his 1948 book, “The Fine Art of Mixing Drinks”.

The dictionaries define both Slings and Toddies as “mixtures of sweetened spirits and water.” While Slings have always been served both hot and cold, the toddy was originally a hot drink only. Today, however, Toddies, as well as Slings are served both hot and cold. Slings are usually made with lemon and either sugar or some sweet liqueur. Toddies usually contain a thin slice of lemon or a piece of lemon peel but no lemon juice. Also, they usually contain one or more spices, such as cinnamon, cloves, or nutmeg. These differences, however, are merely incidental and, when served hot, it is difficult, if not impossible, to distiguish between a Sling and a Toddy. One distinction between the cold drinks is that a Toddy is usually made with plain water, Slings with charged water or Ginger Ale.

SINGAPORE SLING Of alll the recipes published for this drink, I have never seen any two that were alike. Essentially it is a Gin Sling with the addition of cherry brandy. The following is typical of the various recipes.

Shake and strain into 8 oz Highball glass or use 10 oz glass and leave 1 large ice cube in the glass. Fill glass with charged water. Some recipes call for the addition of Benedictine. Also, some call for ginger ale in place of the charged water. A slice of lemon peel should be twisted over and dropped in the drink.

Some good points, there, especially the comment, “Of alll the recipes published for this drink, I have never seen any two that were alike.” Also interesting that Embury is the only one I’ve seen, up until some modern authors, to specify “Kirsch”. Well, he did like his cocktails on the dry side. Though, you will see, as is typical of recipes which forgo Cherry Liqueur for Cherry Eau-de-Vie, that the authors find themselves adding sugar syrup to a recipe which usually doesn’t contain any.

Anyway, unless I’m working at Heaven’s Dog, where we make the Slanted Door Singapore Sling as our house recipe, I always make the following Charles Baker, Jr. recipe when I have a request for Straits or Singapore Slings. 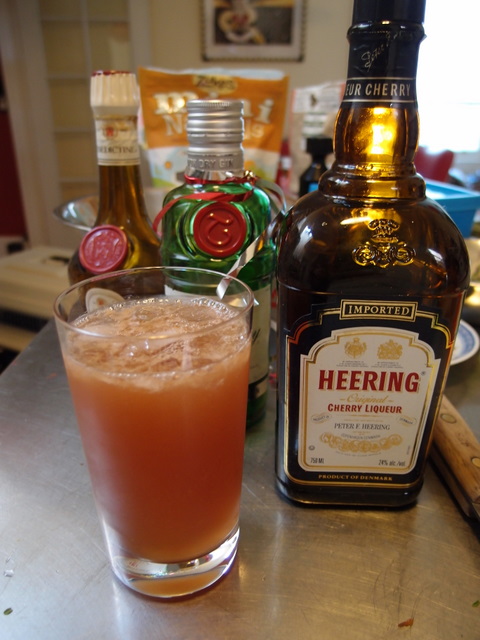 Actually this sling was something of an improvement over the sweetish Raffles job, to your Pastor’s present-day taste. It was a trifle dryer, had a bit more lime juice than average here in the United States; and, finally the inclusion of the crushed–seeded–lime hulls in the finished drink lent added aroma and flavor as they do in Gin Rickeys.

Shake with fine ice till quite cold, strain into short highball glass, letting some of the ice go in also. Cap with chilled club soda; garnish with ripe pineapple stick &/or cherry. Personally we float-on the Benedictine-Cognac after finished drink’s poured.

A lot of times Baker gets flack for drinks that need to be significantly massaged before they are palatable. Heh, well, if there was anyone who understood the appeal of the dying embers of Colonialism, it was Charles Baker, Jr. To me this version of the “Colonial Sling” just works. Give it a try and let me know if you think so too.

Addenda: while I was chatting via email with Erik Adkins about Slings, he suggested I also send a note to exotic drink expert Martin Cate, of Smuggler’s Cove, who he said had expended a fair amount of energy researching the recipe he uses for this drink.

I did a ton of digging before putting it on my menu, and I just couldn’t find anything resembling consensus on the issue. Between Dale, Difford, Regan, etc. etc. there were a lot of opinions. I’m reasonably confident in the role of Heering & Benedictine, I’m not confident in the role of pineapple juice. Below is what I went with, though I ended up calling it a Straits Sling on my menu, but still maintain that the Sing Sling was probably pretty close.

I think the double bitters was something that B&B or Rickhouse was doing that I liked.

Which brings us back to something very close to a single serving version of the Straits Sling at the beginning of this post! Sounds delicious, I believe a field trip to Smuggler’s Cove shall be in order!

This post is one in a series documenting my ongoing effort to make all of the drinks in the Savoy Cocktail Book, starting at the first, Abbey, and ending at the last, the, uh, Sauterne Cup.